Over the past month or so two land disputes on the have gained a significant amount of media attention.  The first case gained coverage worldwide as farmers in Lampung province alleged that at least 32 farmers have been murdered by palm oil companies since 2008.  The second case so far has been limited to the regional papers and is still unfolding.  In Jambi province villagers have repeatedly attacked the base camp of a palm oil plantation, claiming that they have been wrongfully evicted from their land by the company.  In the most recent attack the villagers destroyed heavy equipment, set fire to buildings, and severely injured (one subsequently died) personnel from the company.  In my mind these two incidents illustrate two separate problems related to land tenure on .  I'll begin with the first case.

On December 14, 2011 several residents of the Mesuji region of Lampung (the Southern part of Sumatra) journeyed to seeking a meeting with members of the House of Representatives.  They were accompanied by a retired army general, who served as a kind of spokesperson for the group.  The group claimed that since 2008 dozens of farmers have been killed (hundreds injured) by private security forces working for two palm oil companies: PT Sumber Wangi Alam and PT Silva Inhutani.  Clashes between the companies and the villagers stemmed from conflict over land; the villagers claimed rightful ownership while the companies insisted they had been granted use rights by the government.  The group showed video of gruesome killings, including beheadings and mutilation of bodies, allegedly perpetrated by the security forces.  The accusations sparked outrage within the government and across the country, and President Susilo Bambang Yudhoyono promised to launch a full-scale investigation into the issue.

Since the story initially broke a significant amount of confusion has emerged surrounding the land conflict.  One of the most embarrassing things that has come out concerns the origin of the videos used.  Close examination reveals that they were most likely made in the Pattani region of southern , where separatists have been locked in a bitter struggle with government forces.  No one disputes that killings actually took place, though.  The main point of contention lies in identifying the aggressors; as mentioned in the previous paragraph the villagers claim they are the victims of brutality perpetuated by private security forces, whereas the companies claim that the villagers have ambushed their work camps, killing several personnel.  The team dispatched by the House of Representatives to investigate concluded that at least 9 people were killed in April (1).  But there is still a lot of back and forth about who is to blame.

This whole conflict boils down to the control of land, which is a pretty big issue in .  Land "ownership" is complex problem and can be understood in a number of ways, but to really get to the heart of it we need to understand a little bit about land in .  Under the Dutch, who controlled most of the territory that would become , a western system of ownership (domein) was introduced.  In many places this system of private and state ownership was in conflict with local systems of management, which as a general rule are more communal in nature.  Moreover, across the 17,500 islands of the archipelago there is tremendous variability in local systems of land management, but the colonial authorities replaced these with a one-size-fits all simplified system.  When became independent in 1949 the new leaders inherited the Dutch system.  During the early years of the Republic some minor reforms were enacted, but the most significant move to codify land use regulations was contained in the Basic Agrarian Law (#5/1960) which outlined the main forms of tenure recognized across the country:


Though there were token efforts to incorporate traditional (adat) systems into the overall legal framework stalled when Suharto came to power in 1967.  In fact, with the passage of the Basic Forestry Law (#5/1967) the national government, in the form of the Ministry of Forestry, granted itself ownership and the right to manage all land classified as "forests", which amounted to about 75% of the country.  In "forest" areas this law replaced the Agrarian law and gave a huge amount of power to the central government while at the same time marginalizing virtually every local user group and system in the country.  In other words, even if people had been working land for generations, the central government could (and very frequently did) take the land and award it to some mining, plantation, or logging company.  Any opposition was harshly put down by the army and national police. 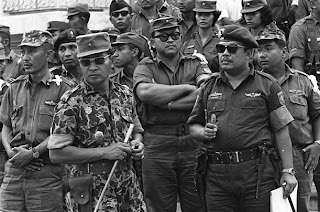 When Suharto fell in 1998 so did his authoritarian system of control.  Power swung back to district (kabupaten) governments, and people were emboldened to reassert traditional claims over land and other natural resources.  However, adat systems, though recognized at some levels, have yet to be integrated into the national system of land titling and tenuring.  Instead what has happened is that the formal and adat systems exist in parallel, with adat rules being subservient to formal rules.  Moreover, in order to be recognized, an adat system has to be recognized by the government, and most haven't reached this level.  This has created a significant amount of conflict, including the Mesuji case.

Complicating this is the fact that the system of land titling in is fairly byzantine.  It is difficult and expensive (2) to get land ownership registered with the government, and so most people don't do it.  Over the past 40 years the national land authority (BPN, Badan Pertanahan Nasional) has registered about a third of the country's privately-owned land, but there are still approximately 60 million unregistered.  At the current rate of about 1 million registrations per year, it will take another 60 years to finish the job.

The upshot of all this confusion is that there's really no good way to settle land disputes.  District governments grant usage rights to companies without regard to local claims in an effort to increase revenues.  Villagers are underserved by the system and are frequently in the dark about the legalities of land as well as district development plans.  No one really trusts the courts since they are open to outside manipulation.

The second example comes from Tebo district in Jambi province, where as many as 300 villagers last week rampaged though an oil palm camp belonging to PT Lesari Asri Jaya (3).  Newspaper reports describe the attackers as "encroachers" (perambah), which to me indicates a bias towards the company.  Other villagers prevented the police from reaching the seen of the attack.  The dispute is over claims to an area totaling about 60,000 hectares.  The difference between this case and the Mesuji case, though, is that the violence has been perpetrated by "pendatang", or people that have recently settled in the area.  According to Tebo district authorities the villagers come from other districts and acquire land through illegal transactions with locals.  This is a common occurrence on Sumatra; the group encroaching into in Merangin district, which I described in a previous post, were also from other districts and provinces.

This second case illustrates a dynamic that seems to have received less attention.  In Central and , at least, there is a phenomenon whereby local people sell land to outsiders.  This happens in protected forests and national parks.  What motivates local people to do this is unclear; they may view the land as rightfully theirs or they may be motivated by shear opportunism.  The reasons aren't really important for this discussion; what is important is that there are several enabling factors that allow this to happen.  The first is that in many places there is little enforcement or patrolling, so it's relatively easy to squat on land and be reasonably certain that nothing is going to happen to you.  another enabling factor is the lack of recorded titles to land; land is frequently bought and sold without survey and paperwork here.  A third enabling factor is the existence of a ready market of people that are willing to move to a new place and buy the land on the word of the villagers alone.  This market exists, according to many sources, because there are no other opportunities for the people.  What makes more sense to me, however, is that this movement into "frontier areas" is the result of all of the previously described land problems taken together.

Cases like these are frequent in .  USAID estimates there are at least 1500 major land conflicts that have yet to be settled.  The cases seem to be increasing since the fall of Suharto, which has in many cases created a power vacuum in which various local interests struggle to gain control over natural resources and land.  Though there are many capacity and advocacy NGOs working in the field to improve the situation, the recent violence shows that these issues are far from being resolved.

(1)  According to one account, tensions between PT Sumber Wangi Alam and the villagers came to a head when a grandson of a village leader was beheaded by security personnel for attempting to confiscate the company's harvest.  Several hours after the murder, approximately 200 villagers descended on the plantation, killing 5 SWA workers.

(2)  According to USAID, the cost of registering land averages out to about 11% of the total value of the property.  This is three times greater than the average cost across .

Posted by Geografika Nusantara at 3:27 PM

Sites related to this blog and my project

Other Indonesia Blogs and Sources